E. Martin Browne wrote to me while I was working on my doctoral dissertation about his life and work, “When you connect with the Spirit of Light inside you, the Spirit writes a letter on your heart. It is an open letter that is then read and written on the hearts of our friends, our companions, and all our relationships. When our Spirit enters Glory, The ‘Great I am’ will look in our heart and see all those we brought to their Inner Spirit of Light.” This is Martin’s open letter. 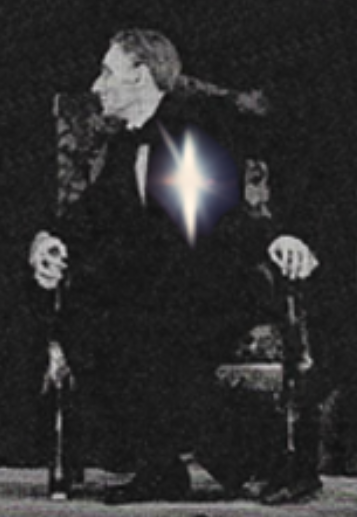 Martin studied for the ministry in the Anglican Church of England. While in seminary, he worked with religious plays. He loved to act and direct. When he graduated, the Spirit drove him into the professional theatre in London. If you can picture all of twentieth-century English theatre as a wagon wheel, then E. Martin Browne is the hub of the wheel. The spokes are the many artists who contributed to the art form, and the rim is the theatre and film that we know today.
In 1930, he met a prominent English poet, who was interested in writing for the theatre. For three years they corresponded and met to discuss the art of theatrical writing. Then from 1933-59, Martin became the literary midwife and the first director of all of this poet’s plays. That poet’s name was T. S. Eliot.
During World War II Eliot sank into despair over the brutality of the war. He fled to America, but there was no escaping the impact of the war. His pen dried up, and he faced the most serious case of writer’s block in his career. The war broke his Spirit. Eliot wrote, “I have no desire to ever write another word.” He was prepared to spend the rest of his life teaching. However, Martin did not give up on him. For ten years, they corresponded, and Martin let his Spirit light a fire in the soul of his friend, Tom. When the war ended, Martin produced a revival of the play, The Family Reunion, which closed because of the war. This got Tom to start writing again. Thus, because of Martin the world has the pleasure of three of Eliot’s best works, The Cocktail Party, the Confidential Clerk, and The Elder Statesman.
Other poets and dramatic writers who owe their beginnings to Martin are Christopher Fry, Gordon Bottomley, and Ronald Duncan. Martin’s Spirit touched them all.
During W.W.II, when the theaters in London had closed because of the danger of the bombings, many of the actors found themselves out of work. Three of these actors took regular work to support the war effort. They all felt that this was the end of their acting careers. Martin convinced Queen Elizabeth, later known as the Queen Mother, to establish and finance the “Pilgrim’s Players,” a touring theatre company that played in the refugee camps outside London. He recruited these three actors along with many others to be part of the company. All these actors say that if it had not been for Martin they would not have been in the theatre of the day. Their names are Sir Alec Guinness, Sir Laurence Olivier, and Robert Speaight.
Another major part of the theatre scene in the England of his day was the revivals of the Medieval Mysteries, the Morality plays, and modern Christian Drama. All these can be traced back to E. Martin Browne. He was the first to start reviving these Medieval plays which were performed by the trade-guilds on specially built hay wagons. His most famous was staged in the bombed out ruins of the York Cathedral at York, England. He was the world’s foremost authority on the subject and traveled all over the world lecturing about how to produce them.
The modern voice training technique, which is used in training professional actors in the USA and most of Europe, is the technique of Kristin Linklater. She got her training at the Central School of Speech and Drama in London, where Gwen Thurburn and Elsie Fogerty pioneered the technique. Thurburn and Fogerty developed the technique, under the guidance of Martin, while training the chorus for the first production of Eliot’s Murder in the Cathedral, which E. Martin Browne directed. Again, his Spirit was at the hub of the movement.
In 1969, his Spirit touched me. He inspired my playwriting, my revival of several Medieval Mysteries, and my understanding of play directing. His Spirit gave birth to the yoga and acting process, which I teach today. And the Living Bible Stories are a modern version of his “Christian Drama.”
On 27 April 1980, The ‘Great I am’ read Martin’s open letter. He is most pleased with him.