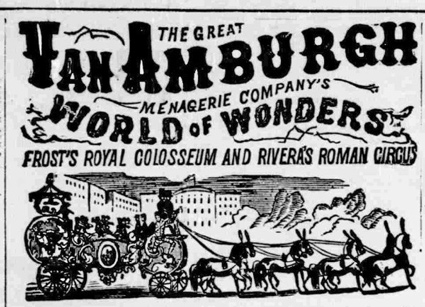 It was Christmas Eve, and as Isaac did his work he could hear the choir in the church across the valley belting out the words, “Peace on earth and good will toward all.”  “Sure,” he thought, “like that could ever happen.”

During the winter, the Circus and its performers went south to their winter quarters.  There they worked on their acts and tried out new things.  This time was actually their busiest season, except for the Christmas Holliday.  On Christmas Eve and Christmas day, they celebrated as one big family.

The great lion trainer, Isaac van Amburgh, had to work no matter what the day.  He fed his lions twice a day and cleaned out their cages.  If they were sick, he cared for them.  They were like his children.  He treated them with respect, and they respected him.  His favorite was the lion, Daniel.  He named him after the Biblical Daniel and often paraphrased the verse 6:16, “May my ‘I am’, whom I serve continually, deliver me!” 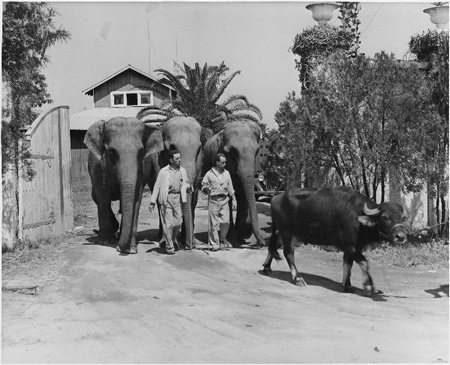 On this Christmas Eve, Isaac gave Daniel an extra big steak, and the lion ate it in short order.  He cleaned out his cage and was about to transfer him from the holding cage when the shoot slipped and crashed to the ground.  Daniel was faster than Isaac, because before he could close the gate, Daniel sprang free.  Isaac called to him, but he was gone in a flash.

Isaac ran through the camp screaming to the others that a lion was loose.  Most everyone ran for cover and the anxiety level went through the roof.  Only a few hearty souls came out to assist in the search.  They looked everywhere.  Isaac spotted tracks in a patch of soft clay, but they petered out as soon as the big cat crossed the grass.  Soon everyone was seeing and hearing things. The lion would have to be in ten places at the same time, if all their cries for help were true.  This made it extremely difficult to track Daniel down.

Suddenly, Jim, one of the clowns, came running up to Isaac.  He was white as a sheet, even without his make-up.  He was screaming incoherently, “Annabel!  You have to do something.  Oh, my!  Poor Annabel!  Do something!  Why, don’t you do something?”  Annabel was a little lamb that Jim used in his act.  Isaac tried to calm him down, but nothing worked.  He was hysterical.  Isaac sat him down, took off one of his rubber thongs, and whacked him over the head.  Jim responded immediately, “Thank you.  I needed that.” 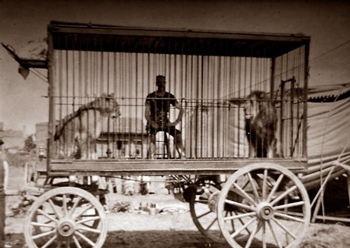 Finally, he was able to tell the others what happened.  “When I heard about Daniel getting loose, I ran to get Annabel.  When I got there, her tether was chewed through and Annabel was gone.  I just know that Daniel has taken and eaten her.”  Everyone ran to see.  However, there was no sign of any blood or bits of wool to indicate that anything violent happened.  Someone suggested that the lion carried off the poor little thing and did the dirty deed somewhere else.  This is not what Jim needed to hear.  He broke into uncontrollable tears.  Then they heard screams coming from outside the mess tent.

Everyone ran in that direction.  When they arrived, they found the cook’s wife standing outside the kitchen over a pile of red stained bone.  The meet was all chewed off of them.  The cook’s wife was convinced that the lion captured her husband and ate him alive.  The owner of the circus went to get his gun and was prepared to shoot Daniel on sight.  Jim fell on the bones weeping.  He knew they were not the cook’s bones.  They were Annabel’s.  Sobbing and wailing, he buried his face in the bones.  Slowly he stopped crying as the others comforted him.  He sat up licking his lips.

Just then the cook came out the door to see what all the commotion was about.  They told him what happened, and he started to laugh, “As for my wife, she is always screaming.  She will scream at the sight of a little spider.  I’ve learned to ignore it.  As for the pile of bones, no lion ate those.  They are the spareribs from last night.”  Jim stood up and wiped off his face saying, “I knew that.”  Then they heard a gunshot, and the owner shouting. 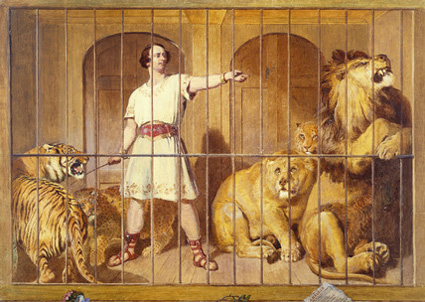 They all ran in the direction of his voice.  They found him standing under a tree screaming, “I got him treed!  Get a light!  I’ll pick him off!”  Isaac wanted to try and net him first.  The owner said he didn’t want to lose any more people but felt a little foolish when he heard about the spareribs.  Someone came with a powerful light and began to search the tree for the big cat.  They couldn’t see him, and then they saw the glow of his cat eyes.  Everyone backed up except Isaac.  He moved in with the net.  The light stopped on the cat and the cat froze.  Everyone but the owner started to laugh.  It was the high-wire family’s Siamese cat.  Now the owner felt like a big fool, but they assured him that anyone could make that mistake.

Frustrated, the owner wanted to send word to the authorities to warn the people in the town.  They desperately reasoned with him to wait at least an hour, because many of the town folk didn’t like them having their camp there anyway.  It was almost midnight.  Isaac assigned two friends to keep the owner busy, and the rest went off to find Daniel.  As they passed the Gypsy woman’s wagon, they saw her standing on the steps looking up into the starry sky.  One by one, they all stopped and looked up.

Directly over the storage tent was an extremely bright star.  Some said it was the North Star, but the Gypsy woman pointed out that it was in the East.  Some said it was a comet, but it didn’t have a tail.  Others said that it was a Star Sign, and it was pointing to the storage tent.  The Gypsy woman, who read palms and told fortunes in the sideshow, proclaimed that it was a sign.  Most everyone thought she was crazy.  Slowly they drifted back to the safety of their quarters.  Only a handful remained including Isaac, and they decided to check it out. 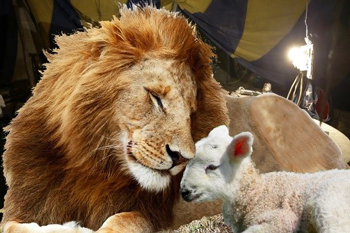 They cautiously entered the huge storage tent.  The light from the star was casting a beam of light through the space around the center pole.  Their eyes followed the beam down to where it left a round spot on a folded canvas.  There in the circle of light was Daniel curled up.  He raised his head to look at them, with a proud and peaceful look on his face.  Sleeping in the protection of his giant paws was the little lamb, Annabel.  The lion and the lamb had lain down together.  Two unlikely friends found each other and shared the gift of peace.  For the longest time, those that saw this could not move. 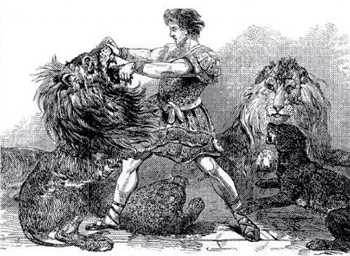 Inspired by this event, Isaac van Amburgh took courage to do what no other lion trainer had ever attempted.  The following summer of 1830, he became the first lion trainer to put his head in a lion’s mouth.  The lion, of course, was Daniel.

Isaac said, “This was a sign from the ‘Great I am’ in us all.  If two of his creatures can do this, why can’t we?