The ‘Great I am’ is more than a spark or a glowing ember. ‘I am’ is a raging fire, a blinding light, a new life in the Love-light.

From birth Dick rejoiced in the family Christmas party. They sang carols, eat delicious cookies, and drank yummy homemade eggnog. At the end of the evening, Grand Elda always told the same Christmas story to the delight of the children and adults alike. 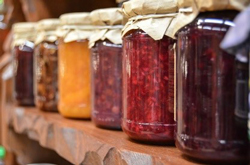 In the late 1800’s, Grand Elda lived in a small cabin deep in the Northwood, with little Olive, who would grow up and become Dick’s mom. Pap Bill was in the Navy and often didn’t get home for months at a time. That year he was home through early December and they laid up provisions for the winter. 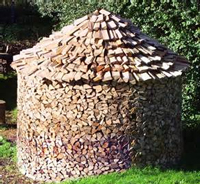 The root cellar was full of homemade preserves and all their root crop and cabbage from their garden. The smoked meats hung from the cellar beams. The salted fish was in barrels. And Pap Bill worked for weeks cutting and splitting wood, which he stacked neatly about twenty yards from the house in a round log stack that made its own house for the wood.

Pap shipped off on a long voyage in mid-December, so Santa came early for him. But Olive had to wait until Christmas Eve. There was much hugging and kissing and crying and waving good-bye.
A week after Pap left, Grand Elda filled the large wood box next to the hearth and went back to helping Olive with her quilting project. The weather was turning foul, and they were very happy to be in their cozy cabin working on the quilt. When it started to snow, Olive became very excited and wanted to go out and play in it. Unfortunately, it was already growing dark, and Grand Elda promised that they would go out and play tomorrow. Later, Grand Elda banked the fire and they went to bed. 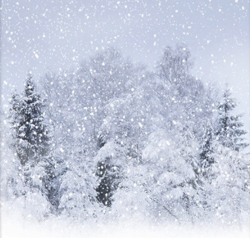 In the middle of the night, Olive woke up ready to go sliding. Grand Elda convinced her to crawl into bed with her so she could get a few more winks. Olive fell off to sleep at once, but Grand Elda was now wide awake. The storm was passing, because it was growing very quiet outside. She thought of Pap Bill, a new design for a braided rag rug, and making some mincemeat pies in the morning. She didn’t feel tired, so why not get up and start the pies now. Besides, it felt like the fire needed a log.

The fire was almost out, which was strange. She put a log on the fire and lit a lamp. The clock said nine o’clock. It must have stopped after they went to bed. She checked. It was fully wound and ticking. The windows were dark and frosted. She went to put on the kettle for tea, but there was not enough water. She took the bucket, put a shawl around her shoulders, and went to the door to draw some from the well outside. She opened the door and stood dumfounded staring at a snow wall in front of her. They were snowed in. 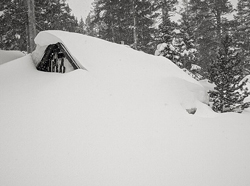 Grand Elda filled the bucket with snow and closed the door. She filled the kettle to make tea water and set the rest by the fire to melt. Olive woke up again eager to go out sliding. She flung open the door and dashed out; her body smashing into the wall of snow. She backed away leaving a perfect impression of her body in the snow. The look on her face was priceless, and Grand Elda started to laugh. She assured Olive that as soon as the snow melted, they could crawl out the top of the door, and they would have the best sliding ever.

The week passed slowly, and the snow didn’t melt enough to make a crack of light above the door. In fact, when Grand Elda pushed a broom handle up through the snow, there was no light visible. It must have been very cold outside. By the time Christmas Eve rolled around there was a small snow room dug outside the front door from digging snow to make water and a little place where they could empty the chamber pot. Olive’s biggest concern was how Santa was going to deliver her present. Grand Elda said, “He’ll come down the chimney. He’s used to all this snow.”

Grand Elda’s biggest worry was the firewood. There was no way to get to the woodpile, and the wood box was near empty. She sat staring at the fire, as if watching it was going to make it burn slower. She sat up into the night reading her Bible. In the middle of the night, she put on the last log. It was a small birch log no bigger around than a person’s arm. It would surely burn up in an hour. She said a Christmas poem and read the story of Joshua’ birth. The log blazed brightly. Transfixed by the dancing flames, Grand Elda fell asleep in her rocking chair.

Early Christmas day, Olive squealed with excitement when she discovered her present from Santa. Grand Elda woke still sitting in her chair. She laughed and sang as Olive danced around her. She said with joy and an overflowing heart, “Nothing can ever keep Christmas from coming!” As she said those words, she remembered the fire.

Grand Elda looked at the last log. It was still blazing away. She could not believe her eyes. Taking Olive in her arms, she began to meditate and said to the ‘Great I am’, “We are here. We are listening.” She and Olive could feel the Love-light glowing brighter within them. They looked at the last log burning brighter and hotter. Grand Elda said, “Thank you ‘I am’ for this Christmas blessing.” She cooked her Christmas meals over it, baked a pie from its heat, and went to bed with it still burning brightly.

The next morning, the log was still ablaze. The fire danced along its length with blue and yellow flames, but the log was not consumed. It was as if Christmas had no end. It burned all week. It burned all month. It burned as though the fire lit on Christmas Eve could never go out. Every morning and every night, Grand Elda thanked ‘I am’ for the blessing.

It was not until late February, that the hard pack caved into the snow room outside the door. All that time, the log kept burning. When Grand Elda walked into the cabin with an arm full of firewood from the woodpile, the log started to go out. Olive and Grand Elda stood over it and watched it flicker its last. Then a smile came over their faces, and Olive said, “Mommy, I can still feel it burning in my heart!” They both felt it and hugged each other. 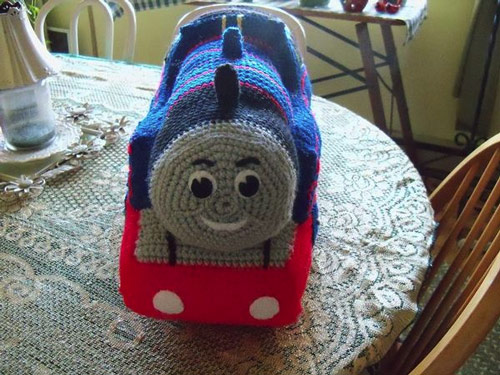 As Grand Elda took the last log from the fireplace, it looked exactly the same as when she put it on the fire, but it was forever changed. She thought, “As are our lives!”
When Pap Bill came home that spring and heard the story of the last log, they decided to close the cabin and move into town.

At age sixteen, Dick finally had to ask, not totally believing the story anymore, “Grand Elda, whatever happened to the log?” Grand Elda went to the door and picked up the doorstop, covered with a hand knit sock that looked like a locomotive. She untied it, pulled out the log, and put it in Dick’s hands. It was as hard as stone, heavy as gold, and still warm. That day a fire was lit in Dick’s heart, and he discovered the Love-light of the ‘Great I am’ inside himself. For his family, Christmas would always be more than a one-day event.