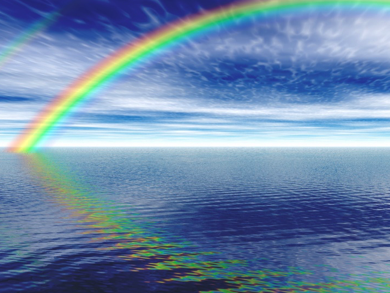 When Sophie was a child, her parents told her stories about rainbows and the ‘Great I Am’s promise. “the ‘Great I Am’s rainbow is within you, and His love will change you from the inside out.” These stories made her preoccupied with rainbows. Then the folklore of Leprechauns and their pots of gold fueled her fascination. Somehow the two tales became blended in her mind. Every time she saw a rainbow, she ran in search of the end of it. Of course, she never found it, but she never stopped trying.
On day, a rainbow arched over the meadow and ended over the ruins of an old cottage. Sophie thanked the ‘Great I Am’ for his promise and then ran to find the pot of gold. When she got to the ruins, she searched frantically for the gold. Finding nothing, she looked up and said to the ‘Great I Am’, “This is not funny. You promised.” Then she saw that the rainbow was now many miles away, over a hill on the horizon. “One day, I’ll be able to catch it before you move it,” she said with confidence. “You’ll see!” 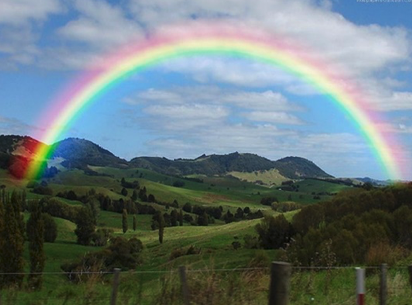 Sophie continued to chase rainbows for many years, often involving other children. Once, another girl found an ancient gold coin, and a boy found a Spanish battle axe from the middle ages. These treasures fueled Sophie’s fantasies for many years.
In adulthood, Sophie continued to chase rainbows only now they were called dreams. The pot of gold became a prince charming, a lovely family, and a magnificent castle. As she struggled through life, she never stopped believing in the ‘Great I Am’s rainbow promise. The rainbow became a cherished symbol of all her dreams.
One day she actually met her prince charming. He wasn’t a real prince, but he was a charming truck driver. They were deeply in love and married within a year. Their wedding fulfilled all her little girl fantasies. Together they had the same dreams and Sophie worked at making them a comfortable home. They had a modest income and managed nicely.
The birth of their son was another blessing and dream fulfilled. A rainbow mobile hung above his crib. Two years into his little life, Sophie discovered that he was autistic. 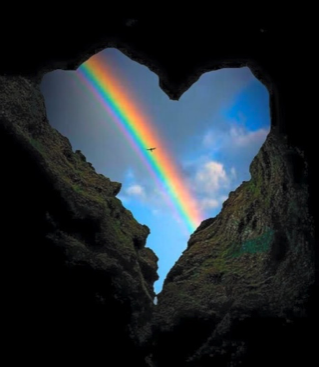 Everything began to change in their lives. The baby required special care. The doctor’s bills ate right through their meager savings and soon changed their life style completely. Her husband took longer hauls, but they could still barely make ends meet. Their house became rundown and the wood stove and other appliances began to break down. To Sophie the rainbow was moving off to the distant hill again.
On a friend’s recommendation, they were picked to be one of the families for the “Extreme Home Makeover” TV program. It was a miracle and Sophie truly believed that the ‘Great I am’ fulfilled his rainbow promise. Their little house suddenly became the magnificent castle of her dreams. After they finished the house, life seemed to go better. The house functioned well and made caring for their little boy easier. Sophie and her husband even began to plan for another baby.
Three months latter Sophie’s husband was killed in a terrible road accident. The loss shattered her dreams. There were no rainbows to be seen anywhere. The insurance money helped financially for a while, but the loneliness and despair closed in on her. She cared for their son as best she could, unable to explain when daddy was coming home. Eventually the money ran out.
She had to sell the house. Sophie could not afford to turn the care of her son over to anyone else nor would she, even if she could. She believed that the money from the house would buy her some time until the next rainbow treasure.

They moved into a large tenement building. It was sparse living, but they managed. Sophie painted her little boy’s room with a beautiful rainbow on one wall. She believed it would bring them luck.
That winter the boiler broke in their building, and they had no heat for two months. Sophie and her son caught bad colds. Her son ended up with pneumonia. Three weeks later he was dead.
After the funeral, something snapped inside Sophie. She walked out of her apartment with only the clothes on her back, and a khaki trench coat. From sun up to sundown she walked the streets complaining to the ‘Great I Am’ about his broken rainbow promises. She lived on the street and gave up chasing rainbows. Every day was the same. She walked the streets, never stopping to talk to anyone. She found food where she could, which was never much. She became thinner and thinner. At night she took shelter in an abandoned railroad line shack which was not even big enough to lie down in. At sunup the journey started all over again.
Endless days passed into a year. Sophie’s life never changed, except for one detail. All her material longings faded as did her childish fantasy of the ‘Great I Am’s rainbow promise.
One morning Sophie was sitting in the line shack listening to the rain beating on the metal roof. Today she had no desire to walk in the rain which she often did. So she just sat there staring at the thirty two bullet holes in the shack wall. 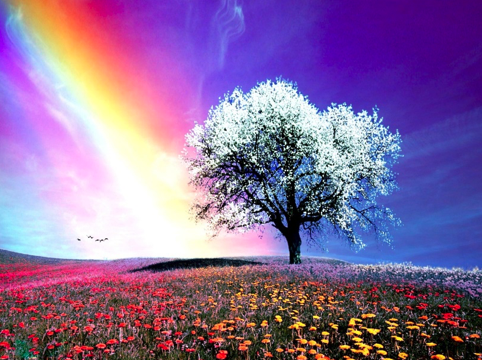 Suddenly the door swung open. A man stood silhouetted in the doorway. As the rain beat on the roof, the sun glistened behind him; Sophie could see a rainbow arching from shoulder to shoulder. He spoke, “Can I come in out of the rain?” Sophie nodded yes. He sat down opposite Sophie with his knees bent up to his chin. After a long silence he said, “Sophie, it’s time.”
Sophie spoke like a child, “Are you the real rainbow?”
“Yes, I Am. And my Love-light has always been within you. Believe me, you will find your rainbow inside yourself. That is our Abba’s kingdom.”
Sophie began to cry, and all her pain left her. When she looked up the man was gone and every hole in the wall formed a tiny rainbow. She reached out to touch them, and they seemed to enter her body and soul.
Now she understood in her heart.