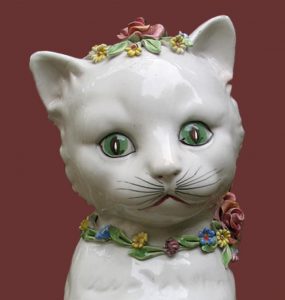 In early June, Mary, who was only fifteen, left home. She was the middle child, with an older sister and younger brother. For years she watched her father brutally beat and abuse her sister. She lived in constant fear that she would be next. By the end of May she knew she had to get out.
Mary took a job as a sales clerk in Emma’s “Jewelry and Fine China” shop. She quickly learned the stock and routines of the shop. The hours were long, but she enjoyed the work and being surrounded by so many beautiful things. Her commute to work by bus put her in the city an hour and a half before the store opened leaving her wandering the streets unprotected. At night it was often two hours before she could catch a bus. It did not take long until she took a one room flat in the city.
During that summer, Mary grew very close to Emma. She was patient and kind to Mary, teaching her everything she needed to know and helping her appreciate the merchandise. She used to say, “If you love it yourself, you will be able to sell it.” Soon Mary became very skillful at sales and this pleased Emma to no end. Emma began to shower her with complements and before long Mary began to feel that she was a person of value. This is something she never felt at home. It is no surprise that Emma became a substitute mother figure.
The image of her real mother handing the carpet beater to her father to be used on her sister was burned indelibly into her memory. That simple household tool would forever be called the “Sister Beater.”
Mary also admired Emma’s fondness of cats. Mary loved all animals and found them to be the only creatures that loved unconditionally. Emma kept three cats in the back room of the store and two at home. One of Mary’s pleasurable chores was the feeding and maintenance of the cats at the store.
As the Christmas season approached, Mary’s work hours got longer. New merchandise arrived almost every day. Displays had to be rearranged. The shop needed to be decorated before Advent. Mary had to learn how to wrap gifts properly. Emma was under enormous stress and was constantly telling Mary how important the sales during this season were to the survival of her business. All the while, they had to keep a cheerful face and welcome their customers with the joy of the season.
It wasn’t until the week before Christmas that Mary was able to focus on what she could get Emma for a Christmas gift. She wanted it to be something very special. She wanted Emma to know that she was very important to her and she loved her like a mother. The search was a joyful time. She knew she would recognize the right gift when she found it.

One evening after closing the shop, Mary was passing an art gallery where she saw a portrait of two Siamese cats in the window. She instantly knew that this was the perfect gift for Emma. The gallery was having a Christmas reception, so they were still open. She went in and had some cookies and cider. When the proprietor asked if he could help her, she inquired about the painting. He took it out of the window and set it on an easel. Mary thought it was absolutely gorgeous. The artist captured the Siamese personality perfectly. When the proprietor quoted the price, Mary’s heart sank it was more than she would earn in ten years.
That night, Mary went over her finances to see exactly how much she could afford. It was not much, but she had hopes that she could find something nice. The next night on the way home she stopped at a second-hand store. It was so packed with stuff; she found it difficult to move through the store. Things were piled on things. That is when she saw the china cat peeking out from behind other things on the top shelf. She carefully took it down. It was very plain in its design with a serene expression on the cat’s face. It was not signed, but it was strikingly beautiful. It cost everything she had. She took it home and wrapped it in grand style.
On Christmas Eve the shop was packed with a steady stream of people all day. Mary could tell that she sold more in that one day than the whole time she had been working there. Emma was ecstatic and told Mary she could go home a little early. Mary gave her the gift. Emma smiled joyfully as she opened it. When she saw the china cat, her expression changed, and she said, “It’s used.” Mary’s heart sank. She turned and left the shop in tears. 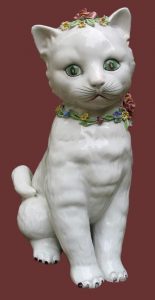 A half-hour before closing, a distinguished gentleman came into the shop. Emma looked at him intently thinking she recognized him from somewhere. He browsed for a few minutes and then saw the china cat on the counter in the back, with Emma’s three cats curled up around it. He asked in a commanding voice, “Does that china cat have three puncture marks on the bottom in the shape of a triangle?” Emma placed him, “You’re Bruce Parker from the Antiques Roadshow.” Bruce said, “I’m no expert on china, but I read somewhere about a small number of china animals that were made by a Franciscan monk. The way the cats are curled around it, I thought that might be one of them.” “No,” said Emma, “it is nothing special.” She plucked it out from among the cats and looked on the bottom. There were three puncture marks in the shape of a triangle. “That’s a pity,” said Bruce, “it would be worth a fortune.” Emma held the china cat tightly to her breast.
Mary cried through the night until Christmas morning. The whole meaning of Christmas seemed to be lost. She tried to do something nice and failed.
The doorbell rang to Mary’s flat. Mary opened the door. It was Emma holding the china cat. Emma said, “My child, you have no idea what you have given me. It is worth a fortune, and I cannot accept it.” Mary sobbed, “I don’t care what it is worth. I could feel that it was special when I picked it up. I only wanted to thank you for loving me like a mother should.” Emma said with tears in her eyes, “How could you ever forgive me? You will always be like a daughter to me, and my cats and I will cherish this gift for the rest of our lives.”