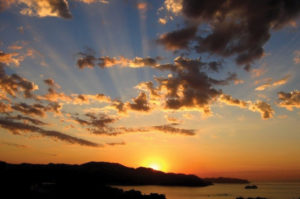 Bill and Rebecca were once the typical American Middle Class family with two children and a promise to one day start on a Spiritual Journey.  However, they fell on hard times.  Bill lost his job as an executive in a large firm.  Rebecca went to work as a short order cook in a diner.  Bill finally had to accept a job as a clerk in a bookstore.  They both made minimum wage.  This put them just above the poverty line.  Then, a series of illnesses hit.  These wiped out their savings because they no longer had health insurance.  Their debts grew steadily, until they were so deep in debt they thought they would never get out.

However, they never gave up hope.  Every week they played the Lottery.  They dreamed that wining would be the answer to all their prayers.  As their economy deteriorated, the Lottery jackpot grew week by week.  Bill gave up smoking.  The family got used to eating potato soup, but this was not enough.

They finally had to sell their home and move into a cheap rental.  The profit from the sale barely covered a quarter of their debt.  They were late with a minimum payment on one of their credit cards because the creditor changed the due date without notice.  Their interest rates jumped through the roof on all their cards.  It felt like their financial hole kept getting deeper and deeper.  They were out of recourses and losing hope.

In spite of their poor economy, they bought one Lottery ticket each week.  Soon this was their only hope.  It was their only dream.  The jackpot grew to over six-million dollars.

They knew they had about as much chance of winning the Lottery as getting hit by lightning.

Then lightning hit.  They received a gift of a new life.  They won the 6.4 million dollar jackpot.  That’s $53,000 a month for the rest of their lives.  What Joy!  What security!  It was wonderful!  They thought this was truly a gift of new life.

But, was this really a gift of new life?  They were no closer to the Love-light that is within them and even the thought of a Spiritual Journey was completely gone.

Buzz was eighteen years old and the son of a Pennsylvania farmer.  He was about to graduate from high school and intended to continue working on the farm.  He loved the farm, the life, the sounds, the smells, and the oneness with the ‘Great I Am’s creation, which seemed to be part of his very being.  Joy filled his heart every spring when day-light-savings-time changed.  He walked down through the pasture listening for the cow bells, smelling the new life in the air.  The cows would soon learn the new schedule and be waiting at the gate to be milked.

After doing the milking, he had a surprise visit from his priest.  His mother and father were killed in a boating accident while on their vacation.  He was numb during all that followed, heroically dealing with his grief and accepting his responsibilities.

That year he plowed, planted, and harvested by himself.  The life cycles of the farm were a great healer, emotionally.

However, the routines of the farm life were socially restrictive for a nineteen-year-old, to say the least.  Church was not an option, except to stop for a brief meditation on the way back from the grain store.  There wasn’t any time to dwell on his loneliness.

Then one winter, a neighbor gave him the book, JOSHUA.  Buzz found himself snatching moments here and there to read this compelling story.  He identified with Joshua and became one with him.  Often, he felt like Joshua was entering him and he was looking at life through his eyes.  Joshua became so real that Buzz and he talked to each other all the time.  When Joshua disappears in the end of the book, he finally realizes who Joshua is.

Buzz mourned His death.  He wept for his parents for the first time.  His loneliness without Joshua and his parents was terrible.  Life and the labors of the farm seemed meaningless.  It was a black night, and Saturday was blacker still.

On Sunday morning he rose before daybreak to milk the cows, but there seemed to be a light glowing within him.  He opened the gate to let the cows into the barn.  As he washed up in the milk room to get ready, he realized he was not alone.  He turned and saw Joshua scrubbing up to help him with the milking.  A joy filled his heart unlike any he ever knew before.  They laughed and did the milking together.

That morning, Buzz went to mass. It was Easter morning. After mass he told the priest that he wanted to sell the farm and become a priest. He said, “I want to spend the rest of my life sharing Joshua with others.” This was truly a “Gift of a New Life.” The Love-light is already within you, and it is a billion times greater than anything you can win on the Lottery.