John, an elderly man in his mid-seventies, is living on the street. Although he is penniless, he makes a major effort to keep up his appearance as a once successful stockbroker. His suit is wrinkled and tattered in places, but carefully brushed clean every morning. His white shirt is yellowed and stained. His silk tie is carefully tied in a perfect full Windsor knot. The matching silk handkerchief is folded with four points and tucked into his lapel pocket. The head of a toothbrush peaks out from behind it.
One morning, while searching through a dumpster at a supermarket for bits of food, he finds a discarded flier about a food drop a couple of blocks away. John kisses the soiled piece of paper, carefully folds it, and puts it in his inside breast pocket.
In a small town several miles away, Elizabeth, a young woman in her early twenties is sitting on a park bench feeding the birds. She is casually dressed in designer clothes, and her hair and makeup are done to perfection. There is a striking resemblance between her and John. Tears stream down her cheeks as she holds out a bit of bread for a sparrow. The sparrow trustingly takes it from her hand and flies off leaving her with a smile. The tears are not for the breakup with her boyfriend last month, although that was very difficult. The tears are for the death of her parents, who died in a bombing last week. She is now all alone and fighting off depression. 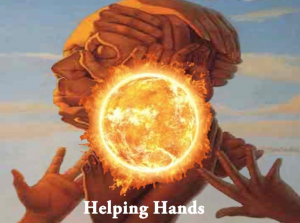 That night in a local newspaper, she reads about a spiritual meditation group that recently formed in an old theatre in town. The words “grace” and “light” leaped off the page at her. Her heart is strangely warmed, and she decides to look into the group. Elizabeth never meditated before, but for years her spirit longed to try it.
Her rational thoughts went into overdrive telling her that meditation was too difficult, too weird, and disrespectful to her parents’ beliefs. She should take time to grieve. She should allow herself to be depressed. There is nothing wrong with a good depression. That last thought did it. She threw down the paper and shouted, “You’re wrong! You’re wrong! You’re wrong! I’m going to learn to shut you up! I’m sick and tired of your black cloud hanging over me!
That week Elizabeth went to the meditation group. They were friendly, making her feel welcome. It was not religious like she anticipated. Everyone seemed to be genuine seekers on a spiritual journey. The leader helped her get started. She listened to the others during the discussion and was amazed at how positive their lives were. Her rational thoughts told her it was all a fake. She told her brain chatter to buzz-off. At the end of the discussion they started talking about a project where they took food and essentials to the homeless in the city. Elizabeth told her brain chatter, “Fake, huh! The only thing fake around here is your constant chatter.”
On the next trip to the city, Elizabeth went along. The van was filled with food, blankets, toilet articles, and other personal items. Her spirit was soaring until they pulled up to the drop location. When she saw the homeless people lined up, her heart sank to a depth that she had never known before. How could people sink so low in this land of plenty? There was not enough in the van for everyone. She gave the last man in the line the only two things left, a bag of carrots and a tube of toothpaste. He was so grateful you would think that she gave him gold and silver. It was John.
John looked into her eyes. He could see her sadness and tried to cheer her up. Elizabeth took the time to talk to him and without thinking began to unload all her troubles on this perfect stranger. John was not only sympathetic; he began to cry for her and the loss of her parents. When he looked into her face and heard her voice, he began to recognize something he couldn’t put his finger on. John made sure that she went home with a smile on her face. 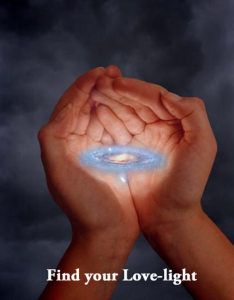 As the months passed and winter set in, John and Elizabeth began to look forward to their meetings. Elizabeth was much more centered, but her sadness was always right under the surface. John always tried to bring a small gift to her, a pine cone from the park, a pretty bottle from a trash can, and a poem he wrote himself on a scrap of paper. In his heart, he wanted to do much more, because he now knew who she was. At least his heart told him he did.
As the holidays approached, Elizabeth felt a deep loneliness set in. She did not feel like decorating, and she didn’t want to go out. It became worse by the day, until on Christmas Eve she found herself sitting on the floor feeling sorry for herself, overwhelmed with loneliness, and going through her mother’s photo album. She was constantly wiping the tears from her cheeks and blowing her nose.
Then in an instant she felt her heart start to pound and a light began to glow inside her. Her eyes had stopped on a very old picture of her mom with a distinguished gentleman. The caption said, “Dad and me.” She looked closer and gasped, “It’s John! John is my grandfather?” That was the moment Elizabeth felt the Love of the ‘Great I Am’ fill her from the inside out.
She dressed quickly and drove into the city to search for John. She searched all night. At sunrise she saw him standing by his cardboard shelter, brushing off his suit jacket. She approached him slowly, and showed him the picture.
John said, “Yes, I know. But I didn’t want to intrude.”
Elizabeth hugged him hard, “You have no idea how much joy it would give me to have you in my life. Will you come home with me and help me decorate?”
“I have no gift,” he whispered.
“You are my gift,” Elizabeth said beaming with light.
“And you are mine,” concluded John.