There once was a great Prince, who ruled over the principality of Bog.  He was poor as monarchs go, and his power came from deep within and his love of the people.  He rode among the people as a leader who cares.  His strength in conflict seemed to come from a source inside himself.  His subjects loved him and followed him anywhere.

However, there were those in the Empire that mocked him and called him a fool.  They said he was out of touch with the reality of the times.  His methods were impractical and idealistic.

Elsewhere in the empire, people didn’t have it so good.  Their leaders ruled by deceit, power, and greed, polarizing the people.  There were rich and poor, privileged and peons, as well as valued members of society and disposable commoners.  As a result, there was constant unrest between those people.

However, in the principality all was peaceful and secure.  They made every attempt to live in harmony with their neighbors. 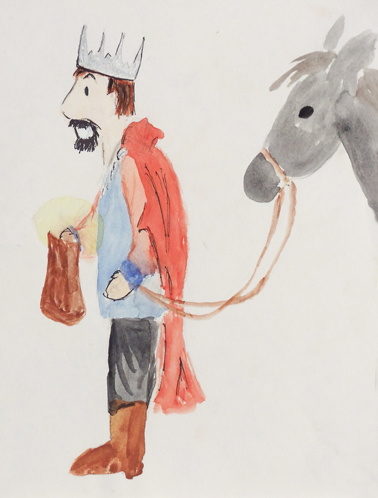 Their caring life style and distribution of wealth made them seem more prosperous, because there were no poor.

When threatened from without, all the people of Bog (men and women alike) rose up to defend the loving way of life they had together.  They were united in the ‘Great I Am’ within and with trust in Him they always prevailed.

In the court of the Emperor, there was a General, who thought the Prince was a weak and ineffectual ruler.  He saw an easy opportunity to exploit the prosperity of this principality and keep the wealth for himself.  So, he plotted to destroy the Prince.

The Prince cared little about his popularity in the court of the Emperor because he preferred to spend his time working for the people.  When he did go, he was friendly to all and found humor in their courteous shallow friendship.

Meanwhile, the General secretly approached one of the greedy neighboring states and offered them military aid.  A Great War broke out.  For months the principality defended itself, but with great loss.  Then the General offered his assistance to the Prince.  The Prince accepted the alliance, and they approached his neighbors together.

During the negotiations, the General poisoned the Prince and reported to the people that he was killed by his neighbors.  With his mission accomplished, the General called for a truce and declared a time of mourning for the death of the Prince.

The people cried and lamented as they bore his body through the streets, with his horse leading them.  When a young girl saw the empty saddle, she saw a vision.  She shouted for all to hear, “Look, there sits his Love-light in the empty saddle!”  The people’s eyes opened, and they saw a smoke like image of the Prince sitting in the empty saddle.  His caring Love-light poured out upon them and they began to rejoice and praise the Great Spirit that His Love-light still lived within them.

When the General passed, the young girl shouted again, “Look, there sits the man that killed the Prince!”  The people looked and saw the evil demons dancing about his horse singing,

A lie oh so sweet.

Praise to the Dark One,

Praise to the death WON!”

The people rushed his horse and knocked him to the ground.  The demons fled, and the people chased the General out of town.  The Emperor had no choice but to arrest the General and throw him in prison.

To this day, the empty saddle is on display in the capital of Bog.  It is a symbol of the caring Love-light in their community and their deep unity with the ‘Great I Am’ within.  Some say that on the anniversary of the Prince’s death they can see his Loving Spirit and Light sitting in the empty saddle.  What is most important is that the caring Love-light cannot be killed.  Its Inner presence still lives and thrives in the land of Bog.  And also lives in you.