THE GOSPEL ACCORDING TO POOH

IN WHICH POOH FINDS A SACRED “RELISH”
Drawings by E.H. Shepard, 1928 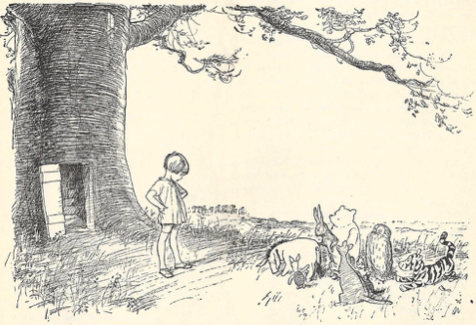 One morning Christopher Robin woke up and decided to take his friends on an expedition. It was a beautiful spring day. He called his friends together. Owl was the first to arrive, and he flew about alerting the others. Tigger bounced up hardly able to contain himself. Kanga arrived with Roo in her pouch. “What a fine day for an expedition,” she said!
Just then, Eeyore arrived, “You don’t say. It could rain any minute, or we could all catch the flu. Rabbit has it, and he is home in bed. Soon we will all be home sick in bed.” Christopher assured Eeyore that this expedition would be quite safe.
Then Piglet arrived pulling Pooh behind. Pooh was rubbing his eyes to wipe away the sleepies, “Hello, Eeyore.”
Eeyore assumes the worst about the eye rubbing, “Pooh are you coming down with something?”
Pooh was confused, “I don’t think so. I just got up.”
Christopher gathered everyone, “It is a springing, singing, ringing fine day for an expedition.”
Pooh looked even more confused, “For an expota… what?”
Christopher Robin explained his idea to find a sacred thing that Father lost. 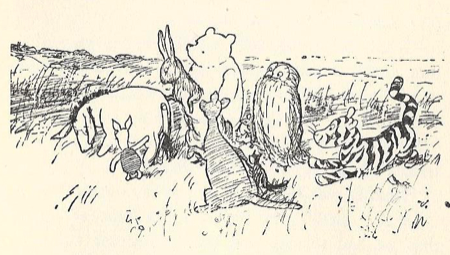 “What sort of thing,” said Tigger?
Christopher explained, “I don’t really know, but it must be precious, because everybody wants to find it.”
When he turned to Pooh and asked what the opposite of refuse was, Pooh said, “The opp… of a what?”
However, Owl knew in an instant, because he was very good at hard words. “My dear Pooh, the opposite of refuse is a relic.”
“That’s it!” said Christopher Robin, “We are searching for a Sacred Relic.”
Pooh asked Piglet, “We are going on an expototion to find a Sacred Relish?”
Now Piglet knew that Pooh did not have much brain, so he was very kind and said, “Yes, something like that.”
Pooh thought to himself this is going to be a bothering sort of day. Trying to be helpful he asked, “Do we know how big it is?”
Owl picked up the theme, “We must first ask ourselves the question what kind of relic Father would lose? Was he angry when he lost it? Then we can ask if it is bigger than a smoking pipe.”
Piglet started to tremble moving closer to Pooh, “I don’t like it when Father is angry!”

Pooh was reassuring, “Don’t be afraid Piglet, if we find it he will be happy again.”
Eeyore over heard this and added, “At least until he loses it again. It’s probably better left unfound.”
Piglet’s ears started to twitch, and Pooh tried to protect him, “If Father gets angry, just say a ‘Rum-tum-tum-tiddle-um’.” Pooh’s brave words didn’t help Piglet much, but his comforting paw helped a lot.
Christopher Robin tried to get the search started, “I think he lost it from his table at supper. Let us go into the wood and see what we can find.” So, off they went.
Kanga had an idea that she explained to Roo and anyone else, who would listen; “It must be very precious, maybe even silver or gold. Perhaps it had precious gems on it. It is best that we look for something shiny, or something that sparkles. Something like that should be easy to find in the wood.”
Pooh turned to Christopher and asked, “What is pre… prec us… you know?” Christopher thought for a moment before answering, “I don’t know exactly, but it has something to do with being valuable.”
“Valbel… what,” said Pooh? “Sometimes the answer makes less sense than the question.”
Tigger bounced around searching, because Tiggers are very bouncy animals. Owl flew overhead and pointed things out when he saw them. Pooh and Piglet stayed close to each other, because Piglet’s ears were still twitching. Doing things for Father was scary business. Eeyore brought up the rear. He thought that was the safest, because when Father got angry there was always a very loud raining. It was always best to be in the back of things when the flashing and banging started.

Then Owl spotted a flash on the ground. He circled wide and zoomed in to point it out to Kanga and Roo, who hurried over and brushed away some moss and leaves. There it was glistening in the sunlight. Kanga called to Christopher Robin and everyone came running. She held it up for all to see. It was bright and beautiful.
Pooh said, “She has found the Sacred Relish!”
Piglet froze in his tracks, head spinning. He said in a high squeaky nervous kind of voice, “Does anyone see Father? Pooh, say something relaxing!” Now Piglet knew that Pooh was very good at saying relaxing and calming kinds of words.
Kanga waved it and shouted, “It’s precious silver. Father will be so pleased with us.”
Piglet said, “Oh, thank you Kanga. I’m so glad to hear that.”
Christopher Robin stood looking at it. He didn’t know what to say. Every time he started to speak, the words got stuck inside him.
Finally, Eeyore poked his nose into the circle and saw what all the fuss was about. He said, “Now you have gone and done it. It’s just an old bent table-fork. It’s not nice to get a body’s hopes up over nothing.”
Piglet squeaked, “Quick, Pooh, say some calming kind of words.”

Everyone turned to Pooh. He thought very hard. He knew it was important. It had to be the most calming words he knew. Oh bother he thought. There is not one hum in my head. Then the words came out, “Let’s have lunch!” Now to a Pooh those are very calming words, but not to Piglet or anyone else.
Christopher Robin put his arm around Pooh and said, “Oh Pooh Bear, we didn’t bring any provisions.”
“Bring what,” said Pooh.
Owl chimed in, “Things to eat, Pooh.”
Pooh then announced, “I never go anywhere without a little something. One never knows when Christopher Robin will take you on an expototion in search of a sacred relish without any visions.” Pooh took out a small clay jar of honey, “It may not be much, but it will get us from here to there.” He took a taste and passed it on. As everyone tasted the honey they began to feel better, especially Piglet. 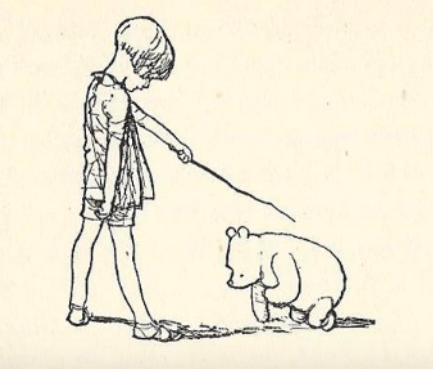 Finally, it came to Christopher Robin. He took the jar and began to look at it. “Where did you get this, Pooh?” He asked in a most curious kind of voice.
Pooh said, “Yesterday, when I was out collecting fir-cones, I turned around and sat down on a stone to rest a bit. When I started to hum Hum-de-bump, Hum-de-lump, I felt I was sitting on something odd and not a stone at all. I looked and found the jar. What a nice little jar I thought. It is perfect for carrying a little something.”
Christopher Robin became excited, “Pooh I think you found it!”
“Found what?” said Pooh.
“The Sacred Relic!” said Christopher. “See this shiny heart on it? That is Father’s Love-light.”
Piglet cheered, “You mean we don’t need to be afraid anymore?”
Christopher Robin was beaming as he Knighted Pooh, “Never again, and Pooh found it!”
As Piglet and Pooh were walking home, Piglet was very proud of Pooh. He said, “Pooh, you did a wonderful thing today. You found Father’s Love-light, so we don’t need to be afraid anymore.”
Pooh thought for a long time, then said, “It’s a wonder what the little light and voice inside you can help you find when you’re not looking for it.”