THE LEGEND OF THE FALLING STAR 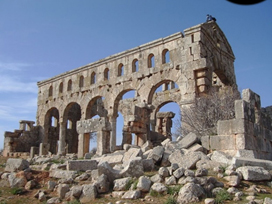 During the 1400s, a dark cloud of confusion hung over the Roman Catholic Church.  Many members questioned the authority of the Bishops, one of whom became Pope.  So, it came to pass, that the Basilica at Rome fell into ruin.

In the year 1505, Pope Julius II sent out a decree to the entire Christian world to rebuild the Basilica at Rome.  He commissioned the great architect Bramante to design and start the construction.  He invited all the Christian people to come to Rome on Christmas and offer their gifts for the new Basilica.  At the Festival, Bramante would unveil his design for the new Basilica. 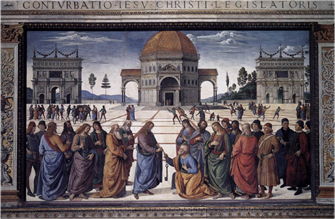 Although these events are a matter of historical record, the story of Bramante and his  design for the Basilica are not.  As the legend has it, Bramante was a rugged stonecutter, who worked with great care over the smallest detail.  He was a short man, with enormous hands that were scarred from the labors of his trade.  When the Pope commissioned him to this great task, he doubted that he could do it.

This great architect lived with a young apprentice.  His name was Egon, an active boy, who happily did whatever his master asked of him.  Consequently, he had many jobs.  He cleaned and cared for his master’s tools.  He went to the market.  He cleaned the house and the workshop.  He had very little time for play.  However, in the few moments he had to himself, he played a game that he invented, called “Chasing the Falling Star.” 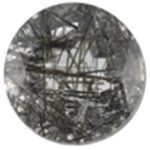 It all began when he found a large, black, clear, crystal marble in the street.  But it was absolutely perfect.  There was not one bubble or speck in it.  The sun hit it, and the marble sparkled with a brilliant light.  He looked into the sky and knew it was a special gift from the ‘Great I Am’.  Slowly he put the marble up to his eye and looked through it.  His mouth fell open with surprise.  Everything around him was in the marble.  It was beautiful.  A light grew inside him, and he felt two great arms embrace him.  If filled him with joy.

To play “Chasing the Falling Star” he placed the marble over one eye, then closing the other eye, he ran down the steps and through the streets of beautiful Rome.  The sun and all the world came together inside the marble, glistening with a white brilliance.  The buildings sparkled like gold.  The waters in the fountains glimmered like liquid silver.  He thought, “This must be a star.  I will call it my Falling Star.”

Egon played “Chasing the Falling Star” whenever he could, but this year after summer he stopped.  He wanted to wait until all the preparations for the Christmas Festival were completed.  Every day he watched the workers building, cleaning, and painting, but he would not look into the marble until it was all done.

His master was very busy, and every morning Egon cleaned up the destroyed models that Bramante built the day before.  He knew that the design was not going well.

That same morning, however, the great architect Bramante was not able to share Egon’s enthusiasm.  He longed to connect to the light within him.  He awoke at his drawing board after working into the wee hours of the night.  He sat there holding his head in his huge hands.  On the following day at the Christmas Festival, he was to present his plans for the new Basilica.  Unfortunately, there was nothing to present.  What was he going to do?  What could he say to the Pope?

That afternoon was everything that Egon dreamed it could be.  His marble captured the parade of kings and nobles in all their finest, the merchants and their show of wealth, and the glorious decorations lining the streets of his beloved Rome.  A light was filling his being.

For Bramante, however, the hours crept away, and still he was not able to conceive of one idea.  He walked through the ancient city in search of inspiration.  It was not in him.

When evening came, Bramante and Egon prepared themselves for the ceremony of the gift-giving in silence.  Bramante promised to take Egon along.  Clutching the marble tightly, Egon imagined that all the beautiful images would soon be his.  Bramante could only think of his failure.

That was a glorious evening.  Grand decorations hid the old Basilica’s decaying condition.  Egon was watching everything through the Falling Star.  His heart was pounding with excitement.  His spirit was flying like a great bird of light over the crowd.  His body danced out of control.  Gently, Bramante laid his huge hand upon his shoulder to calm him down.  Then the great architect knelt in prayer, with his hands twisted tightly together.

There was grand music.  The Pope said the Mass and delivered a message about the dawning of a new age of Christ’s love.  He thanked the ‘Great I Am’ for Bramante and all those who would build the new Basilica.  He imagined that the new Basilica would be a symbol of Christ’s kingdom within us.

His words burned a hole in Bramante’s heart.  He prayed, mumbling quietly, “Lord, I’m no great architect.  I’m only a lowly stonecutter.  What do you want of me?”

Then, the procession of the gift giving began.  Egon was catching every moment in his Falling Star.  First, the Kings brought gifts of gold and jewels.  Their richness glistened in the candlelight and shimmered inside Egon’s marble.  Queens brought fine cloth and precious oils.  Princes and Princesses carried in silver and rare woods.  The Merchants brought fine goods of every kind.  The Tradesmen offered fine tools of iron and steel, leather aprons, clothes, and shoes.

Bramante could not watch.

The procession went on until the riches filled the front of the chapel.  The poor Laborers and Farmers brought workbenches, strong wooden tools, grain, and food of every kind.  From the little they had, they gave their best and finest.  Then Egon realized he forgot to bring something.

Egon turned to Bramante, “Please master, may I have a copper centesimo?”

Bramante was deep in prayer.

“Please master, I will work extra hard to earn it!”  His heart sank, and his stomach ached.

Bramante could not hear him.  He covered his face with his great hands and cried out, “Oh Lord!  How can I design for Thee that which I cannot conceive?”  At that moment, he felt the building shake, as though it were crumbling under the weight of the people and riches.  He reached out to shelter Egon, but he was gone. 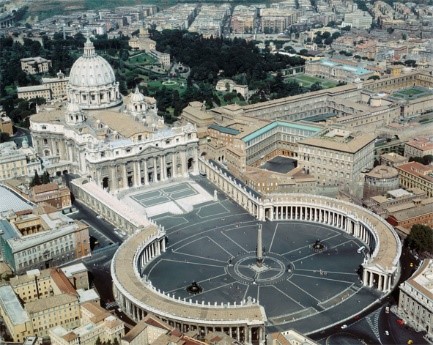 Looking toward the front of the chapel, Bramante saw a massive white light that was blinding to all the people but him.  Then in the midst of the light, he saw the shadow of the Crucifix.  The arms of Christ were reaching out to gather in the multitude of people.  Christ’s head rose like a crowned dome above the trembling crowd and he spoke to Bramante.  “This is how my Church should be, and its corner shall be this stone.”  As Bramante looked closer, he saw the black marble burning brightly at the foot of the altar, transforming everything around into the glorious vision that Bramante saw.

By dawn of Christmas day, Bramante had finished his design for St. Peter’s Cathedral.  He laid it out in the shape of a cross with a colonnade that opened its arms to the world.  This design deeply moved the artist Bernini, who completed it.  The cathedral bore at its pinnacle a majestic crowned dome, which later inspired Michelangelo, who finished it.

On April 11 in the year of our Lord 1506, Bramante put the cornerstone into place.  It contained only two things, a copy of the Holy Scripture and a black marble, which a young boy called a Falling Star.