We are all one in the family of the ‘Great I Am.’ 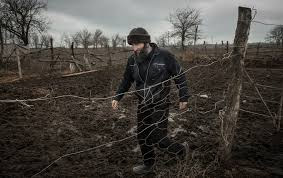 The Swedish Forest Service van sped through the rainy autumn darkness just before daybreak. It slowed as its headlights found a large male figure standing at the first pickup point. It stopped and Harold, an American living in Sweden, climbed in the front seat. The driver greeted him and sped off toward the next pickup point. They talked, and Harold explained that he married a Swedish au pair in the States and later agreed to move to Sweden. He was very grateful to get this job. After ten minutes, they stopped to pick up two large Turks, named Ari and Boga, and a very tall Somali, named Hadji. The Turks chattered away in their own language. The rest sat in silence. Next the van stopped for a stocky Greek, named Tecton. Ari and Tecton exchanged hostile glances. Everyone became silent. Abdullah, an Iraqi, was the next to climb on board. He grunted when he saw Harold and climbed in the back of the van. On the way to the next stop, they all got a lecture on the proper behavior when working with a woman. Then they picked up Sarah, a tall powerful Jewish woman. There was a deep intake of air by all the men and a very slow exhale. Abdullah’s glare bored a hole in the back of Sarah’s head, as they all road in silence.

It was 6:30 a.m. when they arrived at the job site deep in the woods. The driver took Boga aside and explained the work schedule for the day. Boga had worked on the site for ten weeks and knew the ropes. He was the team leader. The driver left. Everyone changed into the work clothes provided and met outside the lunch trailer, after leaving their lunches inside. The rain stopped, but the ground was muddy. Boga divided the team into two groups. Ari, Tecton, and Hadji were to take the small chainsaws to clear away scrub. Boga, Harold, Sarah, and Abdullah would start to put up a fence which the ranger marked out for them. Ari complained to Boga in Turkish that he would not work with Tecton. Boga told him and everyone to speak Swedish. In Swedish, Abdullah said he would not work with a Jew. Boga told them both, with a fierce look in his eyes; they would work with who he said. They all took their tools and hiked the three kilometers to where they were to work. The chainsaws buzzed. Hadji worked slow and easy. Ari and Tecton worked as if they had something to prove to each other. The fence went up. Abdullah had a hard time keeping up with Sarah and Harold. Boga was true to his name; he was a bull and did the same work as the other three combined.

The morning went fast, and lunch was like an international smorgasbord. Harold’s sandwich was a poor example of American cuisine. Ari and Boga pitied him and offered him some of their enormous spread. Within seconds, everyone was sharing with everyone else. The tension vanished in a sea of laughter and culinary delights. 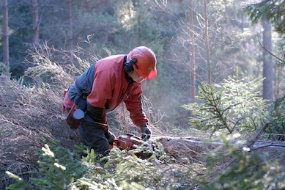 That afternoon the work was more like play as the teams began to work together. Tecton was clowning around with his chainsaw while cutting a flimsy shrub and suddenly it snagged, kicked, and chopped down on his thigh. It cut a deep gash all the way to the bone. Ari screamed to Boga, and everyone came running. Ari ripped away Tecton’s pant leg and tried desperately to stop the bleeding. Boga ordered Hadji to run the eight kilometers to the Forest Service office and get help. This slow worker suddenly became a gazelle, leaping over stumps and gliding through the air with incredible speed. Harold had first aid training and Sarah had experience treating wounds. They tied a tourniquet around Tecton’s leg, while Abdullah took off one of his many layers of clothing and tore it into bandages. They bound the wound as best they could, but it was hard to stop the bleeding. Sarah held pressure on the wound while the four men lifted Tecton to their shoulders and started to carry him back to the trailer. Boga got the first-aid kit and Sarah redressed the wound. Harold released and retied the tourniquet. Ari got Tecton water and kept him talking so he wouldn’t go into shock.

Within five minutes, the ranger and ambulance pulled up. Hadji was panting from his record run. They loaded Tecton and sped off down the dirt road.

Everyone looked after their comrade speechless. Then Abdullah knelt and began to talk to the ‘Great I Am.’ Ari and Boga did the same. Harold and Sarah followed. Hadji looked and began talking to ‘I Am’ while standing. They all talked to the same ‘Great I Am’ whom they loved. They asked for ‘I Am’s presence and healing of their injured comrade. Then a deep silence fell over the group. They were all feeling a unity between them. They looked at each other and a Lightness of Being filled them all. 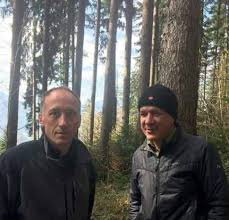 As they stood up, Hadji began to point at them and giggle in a high pitched tone. They looked at him confused. Choking back his giggles Hadji said, “You be blood brothers and sisters!”

They turned and looked at each other. They were all covered in Tecton’s blood. Hadji danced around them wiping the blood from their clothes onto his own, saying, “Me too! Me brother too!”