THE ‘GREAT I AM’ IS PRESENT

Bruce Atkins is a microbiologist.  He is involved in a project to learn more about the effect of endorphin on cancerous brain cells.  It sounds serious, but Bruce is never serious.  Making people laugh is his greatest joys.

Once they were doing a presentation of their project to a group from the Cancer Foundation.  It was very technical and dry.  However, Bruce inserted a little surprise.  In the middle of a cancerous growth cycle, an endorphin cell entered like a packman and gobbled up the cancerous cells.  Then, the little endorphin cell lets out a BURP.  Everyone laughed, except the project director.

Bruce’s pranks were not limited to his laboratory.  He was always playing them on his wife and two sons.  On a family camping trip five years ago, he used some foxfire he found after telling a scary story about the Tennessee Mountain Big Foot, which was twelve feet tall and had fierce eyes as big as softballs.  That night, the others were awakened by the sound of something very large tromping through the woods.  They looked out and saw it, a huge figure as big as a tree with monstrous eyes that glowed like fire.  The three in the tent started to scream, until they heard Bruce outside banging on a pot and shouting.  Bruce told them he killed it and plucked out its eyes.  He threw down the pieces of foxfire, which were glowing brilliantly.  His wife started to scream until the boys started to laugh.

Bruce is a man in control.  He is the center of his universe.  Everything is explainable.  Science has all the answers, and everything outside science is tall tales and silly games.  He feels invincible.

Last summer everything changed.  The family spent the last two years planning and conditioning to climb Mt. McKinley in Alaska.  When they arrived at the trailhead, where they rendezvoused with their guide, Bruce pulled one of his typical gags.  No one found it funny.

The next two days were difficult, but they reached their base camp from which they could make their assault on the summit.  That night a storm blew in with strong winds and blinding snow.  They huddled in their tents for six day just trying to keep warm.  It was difficult to sleep at this altitude, and the days seemed endless.  Bruce was no longer laughing.  The guide took Bruce aside and told him they did not have enough food to make the assault and get back down the mountain to the hut.  They had to start down the next day, storm or no storm. 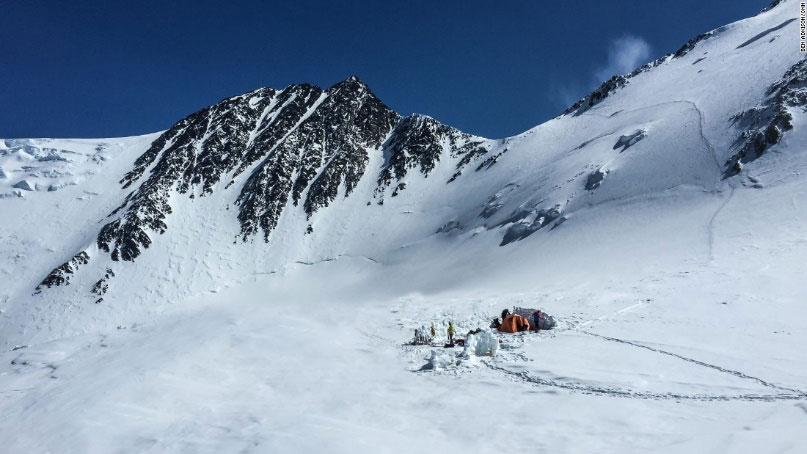 Bruce was not about to let a mountain beat him.  That night the storm passed, and at four a.m., he slipped out of the tent and started his assault on the summit alone.  The summit was only a three-hour climb and a one-hour decent.  He knew the route, and he knew he could do it.  He would be back before they could break camp.  However, by eight o’clock, he was hopelessly lost, and the summit still loomed above him.  The mountain beat him.

Reluctantly, he started down in hopes of finding the base camp.  For the first hour, he was able to retrace his steps, but then they became obliterated by the wind.  It was ten o’clock when he finished a long glissade down a steep snow shoot.  His altimeter said he was now a thousand feet below base camp.  What should he do?  The guide said they were going to start down, but maybe they were still waiting for him.  He decided to continue his decent, setting a course for the trailhead hut.

By four-thirty p.m., new storm clouds moved in.  His food was gone.  His heart rate slowed down.  His feet and hands were freezing.  He couldn’t think straight.  He saw his wife and sons frozen in the snow.  Unknowingly, he stumbled off a sixty-foot cliff into deep snow.  He looked up at the black clouds swarming overhead.

He felt small and insignificant.  This universe, this planet that he knew so well was about to take his life as if he were nothing.  He thought of his parents.

They were not spiritual.  The ‘Great I Am’ was for the huddled masses.  His cracked lips moved, “I Am the center of the universe!  I Am the Great I Am.”

Then he heard a voice groaning from inside him, “Then pick yourself up and tell the wind to cease.  You think you know My mountain.  You know the stars, and think you know it all, when all you know is but one atom in the scheme of things.”

Bruce pulled himself up and closed his eyes to listen to the inner voice.  He saw his body from the inside out.  Every cell in his body was quickly leading him; he knew not where.  Then he saw a bright Light and asked, “Who are you?”

The voice spoke again, and the mountain shook, “I Am ’asher I Am!  The Essence of Being within all things.”

Bruce mumbled in confusion, “What?”

Bruce trembled as he realized he was in the presence of…  The words came hard for him, and he was afraid.  “Y…  You…  You’re inside me.”

“No kidding, Einstein!  You are finally figuring it out!  Who do you think has been helping you all these years?  What an ego!  So, let go of your ego.  Do you want My help now?”

“Look I’m lost, and I have lost my family.  Save them and do with me as you wish.  I know I must be as crazy as they come.”

“First of all, I’m not here to judge you.  I have always been here, and I will always be here.”

Slowly the light started to fade within Bruce.  He shouted, “Don’t leave me here to die!?”

Bruce looked and saw a hand sticking up out of the snow about three meters away.  He crawled toward it and quickly scraped the snow away to uncover the body.  Could it be…

“Don’t start with the thinking again.”  The voice was still there.  “You have to be one hundred percent present, if we’re going to get you down.” 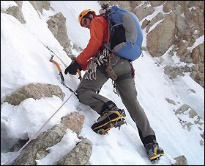 around the broken neck of the lost soul.  In the pouch, he found a hypo-injector of epinephrine.  He thanked the dead man and then said, “Thank you… ‘I Am’.”  He opened his jacket and gave himself the shot.  His heart leaped into action and his body warmed.

As Bruce looked up into the heavens, the storm clouds started to swirl and move away.  He whispered to his Inner Being, “Ok, ‘I Am’, this is your mountain.  Get me down.”  Bruce started to walk down the mountain.  To this day, he swears that his ‘I Am’ showed him the way.

Bruce was the first back to the hut and was able to radio for help.  Two hours later a helicopter was able to extract his family and the guide from the mountain.  No one suffered any major injuries.  Bruce no longer considers himself the center of the universe.  In fact, he likes to say, “It is awesome to be in the presence of ‘I Am’.”